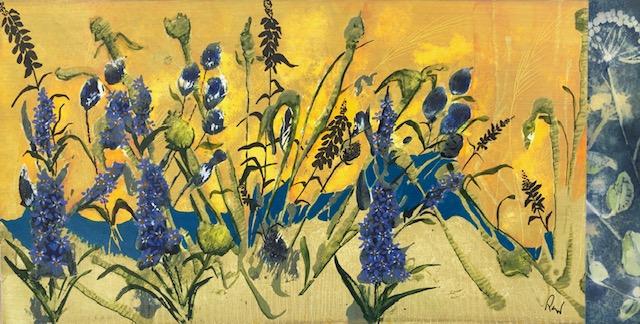 The Blood of Hyacinthus

This piece was inspired by the story of Hyacinthus. There are several versions in Greek mythology. Hyacinthus was a young and very handsome spartan youth. His beauty got him noticed and loved by the god Apollo. Hyacinthus was also admired by the West wind Zephyrus, the North wind Boreas and even by a mortal man named Thamyris. It seems he was quite a popular young man! Even with so many admirers Hyacinthus chose Apollo over all others. Apollo and Hyacinthus spent their time together engaging in all sorts of sports as well as hunting and making music. In one version of the story Hyacinthus died as a result of his own clumsiness. He threw a discus during a competition, mortally wounding himself in the head. In another version it was Apollo who killed Hyacinthus. In this version it was Apollo who threw the discus, possibly while teaching Hyacinthus to throw it, which hit a rock and bounced to hit Hyacinthus in the head, killing him. In a third version Hyacinthus was killed by Zephyrus. In this version both Gods, Apollo and Zephyrus, were competing for Hyacinthus’s attention. As Apollo was teaching the young man how to throw a discus Zephyrus deflected it and it hit Hyacinthus in the head, killing him out of jealousy.

The Hyacinth is said to have grown where the blood of Hyacinthus was spilled.

My painting, The Blood of Hyacinthus, is a tribute to youth, beauty and love.